While Jon Ronson’s So You’ve Been Publicly Shamed discusses the role played by shame and shaming across contemporary society generally, it is in large part focused on internet firestorms where thousands or hundreds of thousands of strangers anonymously ridicule and abuse supposed miscreants. In some cases, the victims are famous people who have committed some sort of transgression – for instance, the author Jonah Lehrer, who was disgraced after it was revealed that he had made up quotations from Bob Dylan. But non-celebrities can also be swept up in the whirlwind. The examples Ronson discusses by and large centre on jokes which were either misunderstood or interpreted in the most damning way possible. Ronson’s key example is Justine Sacco, who was cyber-lynched for the following tweet in December 2013: 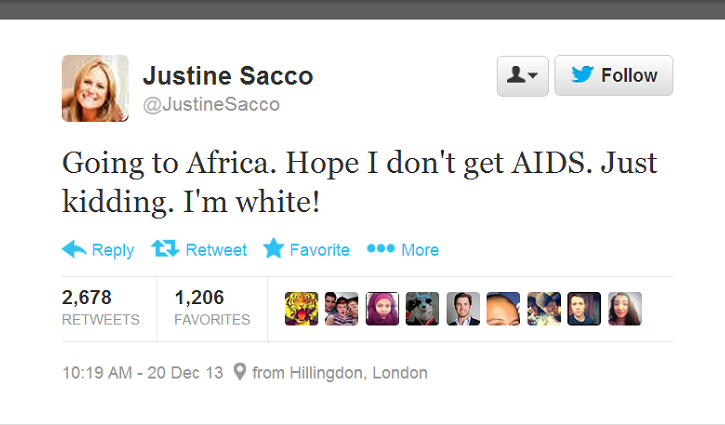 In each of the firestorms Ronson describes, the joke which sparked the rumpus was taken out of context.[i] This is an obvious diagnosis of why people became so furiously indignant at Sacco’s tweet, and exulted in her demise. But it also suggests certain features about context, and how the internet changes in the context in which humour is produced and, more importantly, received.

Perhaps the most obvious aspect of context is the audience’s personal knowledge of the person telling the joke. If we are acquainted with them, or are with them when they crack wise, we know that they are joking and we will usually have a pretty good idea of the spirit in which their remark is intended. One of the frequently-remarked aspects of internet communication is the degree to which subtleties of tone are lost, so what is intended as ironic (Sacco’s tweet) comes across (to her persecutors) as gleefully mocking those less fortunate than her. This isn’t primarily a matter of anonymity (although this is certainly relevant, particularly when considering the often-hateful nature of much of what passes for internet commentary) – it is primarily a matter of not personally knowing the person telling the joke, rather than not knowing who they are. People who knew Sacco would presumably have known she was joking, even if they might have disapproved. They wouldn’t have taken her to be expressing a racist view, just trying to make a shocking joke.

A second aspect of context is a shared experience or common background knowledge. A huge number of jokes, from cliches about airplane food to political satire, depend on the joke teller and their audience having enough in common to be able to pick up on certain cues and make certain judgements without having to think too hard. This is one of the reasons why so much comedy is relatively parochial – it relies on quite specific references and assumptions, and transplanted to another culture or society, it ceases to function as comedy. Of course, the internet is particularly well suited to bring about such cultural transplantation. But I don’t think this is what happened in the case of Sacco, or the other cases Ronson mentions – or at any rate, what happened is not as simple as a piece of parochial comedy failing to travel well abroad.

What happened here concerned background knowledge of a quite specific kind: it included the understanding that conventions for joking exist, and that people who are making jokes should not be held to other standards (similarly, understanding what people say often requires knowing that they have said something metaphorical, and that what they have said should not – indeed, must not – be understood literally). At least some of the responses to Sacco’s tweet which Ronson quotes (e.g., ‘Her level of racist ignorance belongs on Fox News. #AIDS can affect anyone!’) seem to have overlooked or deliberately ignored the fact that she was making a joke.[ii] A related convention is that certain people, in certain circumstances, are licenced to say things which would otherwise offend. Sacco acknowledged that part of the problem was that she was not perceived as benefiting from this convention: “Unfortunately, I am not a character on South Park, or a comedian, so I had no business commenting on the epidemic in such a politically incorrect manner on a public platform”.

The conventions governing when someone is joking, and when it is appropriate to joke, have not disappeared with the coming of the internet – arguably, they have not changed at all. What has changed is the degree of complicity or shared knowledge between a person tweeting a joke and the potential audience of strangers, who may neither share this knowledge nor be terribly interested in its relevance. Not only do people online not know you – worse still, they might not even know whether or not you are joking.

[i] As Ronson put it concerning another case, a photo taken by a woman as part of a running joke of pictures disobeying signs, “shorn of this context, her picture appeared to be a joke not about a sign but about the war dead”.
[ii] Without knowing more about the respondents in question, it’s impossible to be sure. But the response quoted in the main text certainly seems to be accusing her, not of making a tasteless joke, but of making a non-jocular statement predicated on a factual inaccuracy. Put another way: if one felt that Sacco was making a tasteless joke, it would seem peculiar to respond by pointing out that white people can also be victims of AIDS.
Posted by Donnchadh at 1:30 PM